Manuel Chamoso Lamas (Havana, 1909 - A Coruña, 1985) was an archaeologist and writer. During the Civil War, he joined the ranks participating in the "Military Recovery Service" in the borders of Madrid and Levante with the mission of recovering cultural heritage. During the postwar period, he continued to participate in the work of recovering heritage, occupying diverse charges. In 1967 he directed the Museo das Peregrinacións de Santiago de Compostela, of which he was founder. He was president of the Real Academia Galega de Belas Artes and a member of the Real Academia Galega and the Instituto de Estudos coruñeses José Cornide.

The Chamoso Lamas fund, consisting of 173 pieces, was acquired by the Consellería de Cultura in 1988, was deposited in the Museo Carlos Maside and was finally returned and deposited in the Biblioteca de Galicia by Isaac Díaz Pardo when he delivers his own fund.

This is a specialized fund in the Spanish Civil War, which covers a wide variety of documentary types: monographs, brochures, periodicals, drawings, prints, postcards and photographs.

In this first digitization, digital copies of 39 monographs and brochures were made, of which 11 are offered in full text through Galiciana-Biblioteca Dixital, the rest of digital copies can be consulted in the facilities of the Biblioteca de Galicia as they still have their intellectual property rights in force. 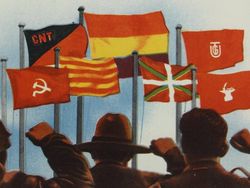