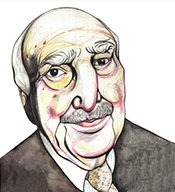 Galiciana-Digital Library of Galicia wants to contribute to the commemoration of the Galician Letters Day 2019, dedicated to Antonio Fraguas Fraguas, with the creation of a new microsite that collects the work as a writer of this prolific author.

Antonio Fraguas was a historian, ethnographer, anthropologist and geographer. All their efforts were directed to expand and spread knowledge about Galician culture. To this end, he collaborates from a very young age with the press, both in specialized journals in their fields of study, and in the major newspapers of the general scope of our community.

To elaborate the Antonio Fraguas microsite, a periodical emptying of the periodicals digitized in Galiciana-Digital Library of Galicia was carried out. The result of this emptying is a collection of 68 articles belonging to publications La Noche, El Pueblo Gallego, Arquivos do Seminario de Estudos Galegos, Vida Gallega and two articles that Fraguas wrote for the programs of the celebrations in the honor of the Apostle, held in Santiago de Compostela.